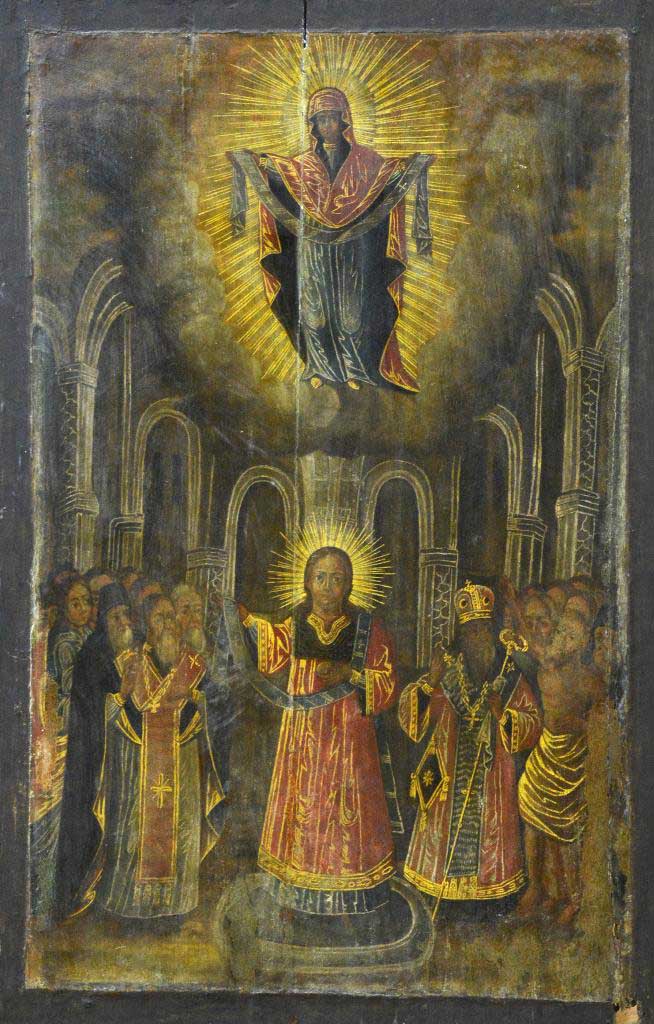 Several icons from the collection of the National Museum of History of Moldova reproduce in their compositions the miracle that would have been performed around the beginning of the 10th century in the church of Mother of God of Vlacherne in Constantinople. According to the legend, the townspeople retreated to the place for fear of an invasion that threatened the capital of the empire. The gathered crowd prayed incessantly, asking the Blessed Virgin to save the city. In the church of Vlacherne, her ancient vestments, which are said to make miracles, have been preserved for centuries. Among the Christians praying in the church was Saint Andrew the Fool-For-Christ, who came with his disciple Epiphanius, who would later become the Patriarch of Constantinople Polyevkt. After hours of fervent prayers, Saint Andrew was worthy to see the Mother of God passing through the royal doors with a procession of saints, who rose above the crowd, praying together with those present. In the end, the Blessed Virgin spread her garment over the crowd, as a sign of defense and protection, leaving the place. Also, from the legend we know that the city was really saved then.

Later, in memory of this miracle, the Church will order the Feast of the Protection of the Mother of God, celebrated on October 1/14.

The composition of the exposed icon highlights the interior of the Vlacherne church. In the upper register, in a radiate oval mandorla, the Mother of God soars on the clouds, holding the omophorus in her hands. She wears loose robes, trimmed with gold thread, beneath which red, gilded shoes can be seen. In the lower register, in the center of the gathered crowd, Romanos the Melodist is depicted sitting on the pulpit with the timetable in his hands, his head being framed by a radiant nimbus. He is dressed in festive robes, of the same shades as the vestments of the Mother of God. Romanus the Melodist is surrounded by several ecclesiastical faces and simple people, including Saint Andrew, who urges his disciple Epiphanie to look up at the miracle that was taking place in the church. The appearance of the hymnographer Romanos the Melodist (490-556) in this composition is not accidental. The young deacon began his activity in the Vlacherne church, where, five centuries later, Saint Andrew experienced his miraculous revelation. The legend tells that it was the Mother of God who endowed the young man with the grace of a wonderful voice, he later glorified her in his songs, writing, in all probability, the Akathist Hymn of the Mother of God. The Church commemorates Romanos the Melodist on October 1/14, the same day when the Protection of the Mother of God is commemorated.

The icon comes from the 19th century, from one of the workshops in southern Russia, being painted in tempera on a wooden support with dimensions 59x90x3 cm.

Icon of the Protection of the Mother of God

„UNDER THE ALIEN SKIES: Lithuanian people in Soviet hard labor camps and exile in 1940-1958”

On Tuesday, September 17th, 2017, at 15:00 hours, at the National Museum of History of Moldova was opened the exhibition „UNDER THE ALIEN SKIES: Lithuanian people in Soviet hard labor camps and exile in 1940-1958". The exhibition is organized by the Museum of Genocide Victims from the Genocide and Resistance Research Centre of Lithuania.

The event was organized by the National Museum of History of Moldova in cooperation with the Embassy of the Republic of Lithuania to the Republic of Moldova through the State Program "Recovery and Historical Valorization of the Memory of Victims of the Totalitarian-Communist Regime in the Moldavian SSR in 1940-1953".

The aim of the exhibition is to tell the citizens of Europe, especially the young generation, about the crimes committed by the Soviet totalitarian regime on the territory of Lithuania. The exhibition was made with documents and materials from the Museums of Genocide Victims, the Special Archive and the Central State Archives of Lithuania from Vilnius, the Lithuanian National Museum, the Museum of Deportations, Exile and Resistance in Kaunas, the Alka Museum from Žemaitia Region and the Regional Museum of Tauragė.

The exhibition was presented for the first time on June 21, 2011, at a meeting in the Parliament of Europe, with the title "Present and Past, Face to Face". That event was dedicated to the 70th anniversary of the beginning of deportations in Lithuania. Subsequently, the exhibition was presented in Poland, France and the United Kingdom, also in several cities and institutions in Lithuania. 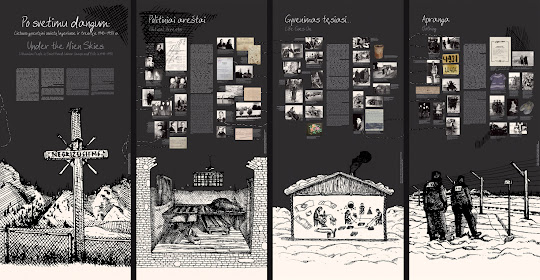