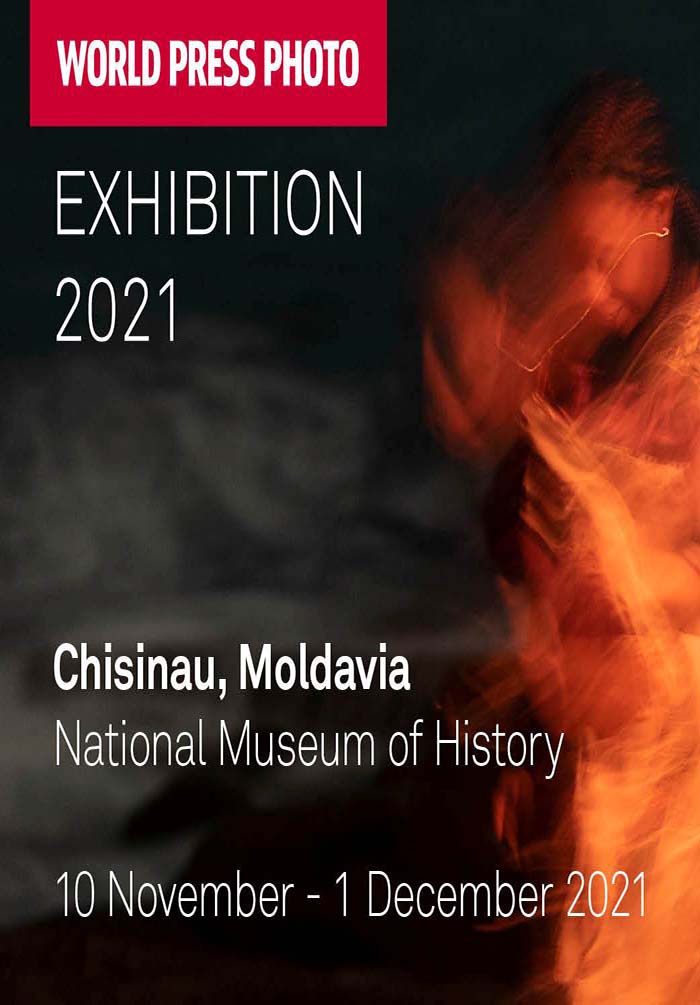 The World Press Photo 2021 Exhibition opened at the National Museum of History of Moldova: "The photos reflect the problems that cause strong emotions and leave no one indifferent".
For the fifth year in a row, the Republic of Moldova hosts the international exhibition World Press Photo, organized by the World Press Photo Foundation in the Netherlands in partnership with the Center for Independent Journalism with the support of the Office of the Embassy of the Kingdom of the Netherlands in Chisinau. The opening of the exhibition entitled "Stories that Matter" took place on Wednesday, November 10, 2021, at the National Museum of History of Moldova.

The opening of the exhibition was attended by ambassadors and representatives of international organizations from Chisinau, as well as journalists, photojournalists, students.

Floris van Eijk, Head of the Embassy of the Kingdom of the Netherlands in Chisinau, made a speech in Romanian, in which he praised the efforts of the World Press Photo Foundation in the Netherlands to support photojournalism in the field of human rights. "The exhibition reflects stories from all over the world, seen through the lens of photographers. These stories are a synthesis of the most important and shocking events of the year. Thus, this exhibition is a unique opportunity to live or relive events that marked humanity last year. In particular, the exhibition focuses on stories that represent human rights challenges. The images in the exhibition show these challenges in a way that sometimes arouses strong emotions, and, of course, leave no one indifferent. Thus, the exhibition creates a bridge of direct and unequivocal communication with the spectator", said Floris van Eijk.

On the occasion of the opening of the exhibition, Raphael Dias e Silva, the coordinator of World Press Photo Exhibitions, Netherlands, arrived in Chisinau, who mentioned that World Press Photo annually celebrates the work of photographers and journalists who endanger their lives in an effort to provide the public with reliable information.

"This year the jury has selected 45 winners in eight nominations. From the efforts of health workers to solutions to climate change, from the Black Lives Matter protests to the unique story of the rescue of a giraffe in Kenya, the stories they tell span a range of issues. This year's collection also highlights how the COVID-19 crisis has impacted our lives, in both visible and invisible crises. In this sense, there is no more eloquent example than Photo of the Year - "The First Embrace" by Mads Nissen. It illustrates the first embrace of a woman in a care home in Brazil, through a plastic curtain, after five months of isolation and restrictions. This portrait reflects hope and connection. In fact, this is the feeling that we hope you will experience in this exhibition: cohesion, a drive for knowledge and a shared commitment to reliable news," said Raphael Dias e Silva.

Victoria Dodon, Editor-in-Chief of the Center for Independent Journalism, noted that CIJ is honored to contribute to the holding of the prestigious World Press Photo exhibition in Chisinau for the fifth time. "In this way, we promote the importance of photojournalism for freedom of expression and pay tribute to the difficult work of photographers around the world who document reality as it is - cruel, unadorned - and convey it to us. They do it in the most accessible form - an image that is especially relevant in the era of social networks, when we consume a lot of visual information. The title of this exhibition - "Stories that Matter" - underlines the importance of the messages that each of the photographs presented. In general, the exhibition retrospectively illustrates a very difficult year: Covid, armed conflicts, protests, environmental problems, migration, health problems, portraits of people who either suffer, or overcome themselves, or collide with the system," said Victoria Dodon.

Photojournalist Nicolae Pojoga emphasized the importance of the explanation to a photographic image, which in a few words says a lot. "Photography without research, without understanding the phenomenon, without pain and suffering and without appropriate text is a simple photograph. Today, the image itself is no longer an enigma; it can be captured using any electronic device. Much more important is the degree of the photographer's awareness and penetration into this or that problem," says Nicolae Pojoga.

Eugen Sava, Director of the National Museum of History of Moldova, where the event has been held for four years, highlighted the fact that the exhibition is valuable for the museum, and every year thousands of visitors come to learn the stories told by the winning photographs. "We encourage you to visit the exhibition in the next three weeks," said Eugen Sava.

The annual international exhibition World Press Photo travels around the world. It is held in almost 100 venues in about 45 countries and attracts more than 4 million people each time.

The first time World Press Photo took place was in 1955, when a group of Dutch photographers organized a competition to show their work to an international audience. Over the years, it has become one of the most prestigious photography and visual journalism competitions in the world.

In Chisinau, the exhibition was first organized in 2017.

Photography lovers can visit the World Press Photo exhibition at the National Museum of History of Moldova in the next three weeks, until December 1.

The event is organized by the World Press Photo Foundation in the Netherlands, in partnership with the Center for Independent Journalism, with the support of the Office of the Embassy of the Kingdom of the Netherlands in Chisinau.